Russia uses a Kinzhal hypersonic missile for the first time in combat: Why is it so dangerous? 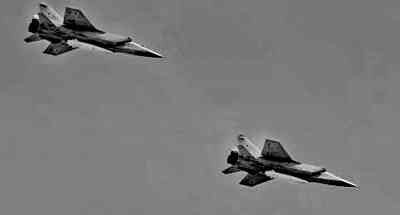 For the first time in action, Russia fires a Kinzhal hypersonic missile: Why is it so dangerous?

Russia has released one of its most powerful weapons in the Ukraine war. It is the Kinzhal ultrasonic missile, capable of reaching very distant targets, avoiding air defenses and even carrying nuclear warheads. What does this global military milestone mean?

Russia marked a global military milestone this Saturday by launching a hypersonic weapon for the first time in combat: it is the Kinzhal missile, with which it has attacked an arms depot in Ukraine.

The Russian Defense Ministry reported the use of the Kinzhals in the destruction of a Ukrainian underground depot containing missiles and ammunition in Deliatin, a town in southwestern Ukraine near the Romanian border.

The Russian authorities published a video of what is supposed to be the impact of the missiles against the warehouse. The Ukrainian Army confirmed the attack but said it could not identify the type of weapon used.

Hypersonic missiles, which are considered the next generation of combat weapons, can carry conventional weapons but also nuclear warheads. And do it faster and more accurately than other missiles.

The Kinzhal, (dagger, in Russian), can avoid anti-air defenses because it is difficult to follow their trajectory due to their ability to change direction mid-flight.

"This is the first case of the use of hypersonic weapons in combat in the world," military analyst Vasily Kashin told AFP.

The Russian state news agency RIA Novosti also points out that this is the first time that Russia has used advanced weapons capable of carrying nuclear warheads in the war in Ukraine.

Why are Kinzhal missiles so dangerous?

Russian President Vladimir Putin introduced Kinzhal missiles in 2018 as "the ideal weapon," flying ten times faster than the speed of sound. Experts believe that Russia leads the race for hypersonic weapons, followed by China and the United States.

Putin has repeatedly boasted in recent years of investing in hypersonic missiles. The Kinzhal can hit a target 1,240 miles away with high accuracy.

The Russian high-precision hypersonic missile was presented to the world in March 2018, when the first test was also carried out with this weapon, which, according to Moscow, is capable of circumventing any anti-missile shield.

One of the main characteristics of the Russian missile is the ability to permanently maneuver during its trajectory, which makes it extremely difficult to intercept.