Russia and Ukraine: Zelensky calls for "meaningful" peace talks with Moscow "without delay" 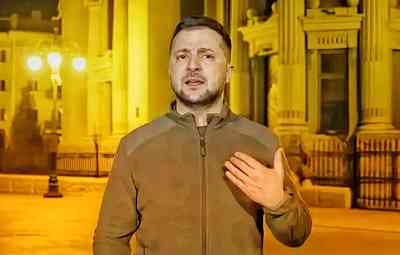 "This is the only chance for Russia to reduce the damage of its own mistakes," Zelensky said in a 10-minute video broadcast late on Saturday on his official Telegram account.

"I want the whole world to listen to me now, especially in Moscow. It's time to meet, it's time to talk, it's time to restore territorial integrity and justice for Ukraine."

"Otherwise Russia's losses will be such that it will take several generations to recover," Zelensky added.

The Ukrainian leader also said that his country "has always insisted on negotiations."

Since Russian troops invaded Ukraine on February 24, several rounds of negotiations have been held between delegates from kyiv and Moscow.

It is difficult to measure the progress that has been made so far in those talks.

Earlier this week, the Financial Times revealed a possible 15-point peace plan that would include kyiv giving up its ambitions to join NATO and promising not to host military bases or foreign weapons in exchange for Western protection.

And Russia's top negotiator said on Friday that Moscow and kyiv had brought their positions "as close as possible" on a proposal for Ukraine to become a neutral state.

But the Ukrainians have been more pessimistic in their assessment of the state of the talks. Mikhailo Podolyak, an adviser to President Volodymyr Zelensky - and a participant in the negotiations - said that his country's position has not changed.

Former Russian Prime Minister Mikhail Kasyanov told the BBC on Friday that Russian President Vladimir Putin was "not serious" about peace talks and was unlikely to offer a solution to the conflict "that is comfortable for the people." Ukrainian".

The outcome of the peace talks remains uncertain.

The moves towards peace talks in this conflict are very important, but also very difficult.

President Zelensky said last night that "it's time to meet, it's time to talk." And it is very interesting that he says that he wants to be heard by everyone, especially in Moscow, during this war, knowing that people in Russia are not hearing the whole story because of the new media laws and because of the crackdown.

READ MORE: What is Dark Matter? Axions may be the answer to the biggest mystery in the Universe | Science and Education

One thing that has emerged from talks with mediators like Turkey is that President Putin has agreed to meet with Zelensky.

But Putin said yesterday - in his first public appearance since the invasion began - that "we know what we have to do next and we will definitely carry out all the plans we have drawn up."

The most important question before the invasion, and still to this day, is what is Putin's plan for Ukraine? Especially now, after Russia has suffered so many losses and his plan is not working out as expected.

We know that the minimum is that he has to provide security to the people in eastern Ukraine, which he recognizes as independent states, and to Crimea.

He hasn't gotten to that point yet, so he's not ready to slow down.