Why have we seen less lightning in confinement? 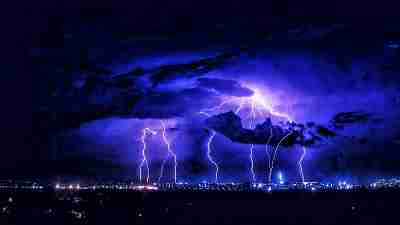 As lockdowns and movement restrictions were put in place around the world during the pandemic, people were spending more time at home and using less energy.  Fewer trips meant fewer air pollutants, the water got cleaner, and now research shows another unintended effect of the lockdown: fewer lightning strikes.

The team used three different methods to measure the lightning, according to Earle Williams, a physical meteorologist at the Massachusetts Institute of Technology.  “All results showed the same trend, i.e. decreased lightning activity associated with decreased aerosol concentration,” said the presenter of the research.

Cloud droplets are formed by some atmospheric aerosols that collect water vapor.  When there are more aerosols, the water vapor in the cloud is distributed among a greater number of droplets, so the droplets are smaller and less likely to coalesce into larger raindrops, explains Williams.

However, when there is less pollution and the clouds form larger, warmer raindrops, "you deprive the cloud of the ice particles it needs for charge separation, and you have reduced lightning activity," notes Williams.

Humans emitted fewer aerosols during the initial phases of the pandemic when the world went into lockdown in early 2020. This resulted in significant reductions in vehicle use and fuel consumption.  “Car traffic has a huge impact on surface aerosol production,” Williams said.

Williams and his team of researchers observed a drop in two types of lightning activity due to this reduction in pollution: lightning striking the ground and lightning within clouds.  One of the researchers' methods, which captured a lot of lightning within the cloud (the most common type of lightning), measured 19% less lightning between March 2020 and May 2020 compared to the average number of lightning during the same three-month period in 2018, 2019 and 2021, explains Inside Science.

A notable finding in the study showed that areas with significant reductions in aerosols appeared to have the greatest reductions in lightning strikes.  Although the Americas did not see as large an impact as other areas, Europe, Southeast Asia and much of Africa saw considerable reductions in atmospheric aerosols and lightning.