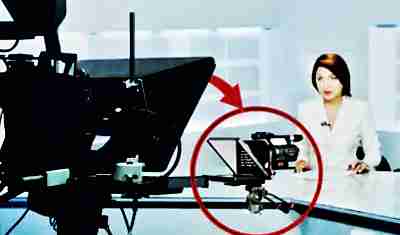 PM Modi's address is cut short by the teleprompter: What exactly is a teleprompter and how does it function? Know everything there is to know about it

Prime Minister Narendra Modi was addressing the World Economic Forum.  Meanwhile, due to a technical fault in the teleprompter, he had to wait for some time.  Teleprompter is a device used by many politicians, news anchors and businessmen.  What is Teleprompter?  How does this work?  Know everything about it.

Television anchors indiscriminately read the news without looking at the paper.  They can do this with the help of teleprompter.  This technology is called Teleprompter or AutoQ.  It is a device that helps one read the script while maintaining eye contact with the audience at all times.  It does not require making notes on paper.  When the script is read in front of it, then it seems that the person in front remembers everything very well.

This is how teleprompter works

The teleprompter consists of two beam-splitter glasses.  Each glass is held on a small stand at a 45 degree angle.  Here the text is shown on the glass with the help of a monitor.  Seeing which the reader can read easily.  At the bottom of the glass is a flat LCD monitor, which is placed facing the ceiling.  This monitor displays words in 56 to 72 pt font.  It has a camera on the back side.

There is a controller on the back of the teleprompter, which controls the speed of the text played on it.  That is, as the reader continues to read the text, the controller scrolls and removes it.  Well now TV anchors control its speed manually.  For this they have a device.

There are 3 types of teleprompters

The teleprompter device used by the President is a glass screen on a stand.  The monitor is placed at the bottom and the glass screen is tilted upward to reflect the monitor.  Television members usually place the presidential teleprompter on each side in front of the speaker.

Floor or stand teleprompters are similar in appearance to presidential teleprompters.  Its operation is also almost the same.  These devices give the production member the option of wall-mounted or stand-mounted.  Actors use it to speak dialogues during the film.

The teleprompter was also used by former US President Barack Obama.  He used to attract people with his speech.  He used to consistently give such speeches, which included fact-figures.  Then people wondered how Obama spoke so well.  It was later discovered that he used a teleprompter.  Teleprompters are used by all US Presidents.