Lohri or The Bonfire Festival 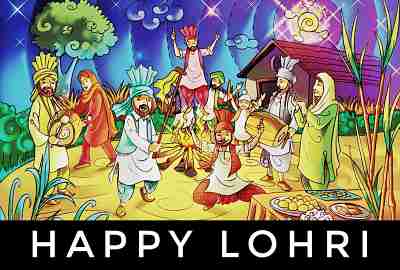 The Complete Information About The Bonfire Festival or Lohri

Lohri is a popular winter folk festival celebrated mainly in the Indian subcontinent.  The meaning and legends about the Lohri festival are many and link the festival with the Punjab region.  Many believe that the festival marks the passing of the winter solstice.  Lohri marks the end of winter and is a traditional welcome of longer days and the sun's journey to the northern hemisphere by Hindus and Sikhs in the northern region of the Indian subcontinent.  It is observed the night before Makar Sankranti, also known as Maghi, and according to the solar part of the Vikrami lunisolar calendar and normally falls on the same date every year (January 13).  Like other harvest festivals in India like Pongal and Bhogi, Lohri is also dedicated to Indra.

Lohri is an official holiday in Punjab, the Jammu region of Jammu and Kashmir, and Himachal Pradesh.  The festival is celebrated in Delhi and Haryana, but it is not an official public holiday.  In all these areas, the festival is celebrated by Hindus, Sikhs, and Muslims.  In Punjab, Pakistan, it is not officially observed, however Christians, Hindus, Sikhs and some Muslims observe the festival in rural Punjab and in the cities of Faislabad and Lahore.

Lohri is linked to the Vikrami calendar and is celebrated on the day before the Maghi festival which is celebrated in the rest of India as Makar Sankranti.  Lohri falls in the month of Paush and is established by the solar part of the Punjabi lunisolar calendar and in most years falls around January 13 of the Gregorian calendar.

Historical references to Lohri are mentioned by European visitors to Maharaja Ranjit Singh's Lahore darbar, such as Wade, who visited the Maharaja in 1832. Maharaja Ranjit Singh's Captain Mackeson makes further references distributing suits of clothing and large sums of money as rewards on Lohri Day in 1836. The celebration of Lohri with the making of a huge bonfire at night is also observed at the royal court in 1844.

Accounts of Lohri's celebration in royal circles do not discuss the origins of the festival.  However, there is much folklore about Lohri.  Lohri is the celebration of the coming of longer days after the winter solstice.  According to folklore, in ancient times Lohri was celebrated at the end of the traditional month when the winter solstice occurred.  Celebrate the days that lengthen as the sun moves on its journey north.  The day after Lohri is celebrated as Maghi Sangrand.

Lohri is an ancient mid-winter festival that originates from the regions near the Himalayan mountains, where the winter is colder than the rest of the subcontinent.  Hindus and Sikhs traditionally lit bonfires in their courtyards after the rabi season's weeks of harvest work, socializing around the fire, singing and dancing together to mark the end of winter and the start of longer days.

The Meaning of Festival Lohri

The ancient meaning of the festival is that it is a celebration of the winter growing season and is linked to the Punjab region.

A popular folklore links Lohri with the story of Dulla Bhatti Jat.  The central theme of many Lohri songs is the legend of Dulla Bhatti Jat, who lived in Punjab during the reign of Mughal emperor Akbar.  He was considered a hero in Punjab for rescuing Hindu girls from being forcibly taken to be sold on the Middle Eastern slave market.  Among those he saved were two girls, Sundri and Mundri, who gradually became a subject of Punjab folklore.  As part of the Lohri celebrations, children go around the houses singing traditional Lohri folk songs with the name "Dulla Bhatti Jat" included.  One person sings, while others end each line with a loud "Ho!"  sung in unison.  After the song is over, the adult in the household is expected to give refreshments and money to the youth singing company.  Lohri also marks the beginning of the harvest season and sunny days.

The festival is celebrated by lighting bonfires, eating festive food, dancing, and collecting gifts.  In households that have recently had a marriage or childbirth, Lohri celebrations will reach a higher level of excitement.  Most North Indians usually have private Lohri celebrations in their homes.  Lohri rituals are performed, to the accompaniment of special Lohri songs.

Singing and dancing are an intrinsic part of the celebrations.  People wear their brightest clothes and come to dance bhangra and gidda to the beat of the dhol.  Punjabi songs are sung and everyone rejoices.  Sarson da saag and makki di roti are usually served as the main course at a Lohri dinner.  Lohri is a great occasion that has great significance for farmers.  However, people residing in urban areas also celebrate Lohri as this festival provides an opportunity to interact with family and friends.

Lohri is celebrated with a bonfire.  The lighting of bonfires during this winter festival is an ancient tradition.  The ancients lit the fire to rekindle the return of longer days.  This is a very old tradition.

In Punjab, the Lohri harvest festival is characterized by eating sheaves of roasted corn from the new harvest.  The January sugar cane harvest is celebrated at the Lohri festival.  Sugarcane products like gurh and gachak are central to the Lohri celebrations, as are the walnuts that are harvested in January.  Lohri's other important food is radish, which can be harvested between October and January.  Mustard greens are mainly grown in the winter months because the crop is suitable for agro-climatic conditions.  Consequently, mustard greens are also a winter product.  It is traditional to eat Gajak, Sarson da saag with Makki di roti, radish, ground walnuts and jaggery.  It is also traditional to eat "until the rice" which is made by mixing brown sugar, sesame seeds and puffed rice.  In some places, this dish, more like a snack, is called "Tilcholi".

Lohri in Jammu is special due to various additional traditions associated with it like making and dancing Chajja, Hiran Dance, preparing Lohri garlands.  Small children prepare a peacock replica which is known as Chajja.  They wear this Chajja and then go from house to house celebrating Lohri.  In and around Jammu, a special Hiran Dance is performed.  Selected houses that have auspicious ceremonies prepare eatables.  Children wear special garlands made of peanuts, dried fruits, and sweets on Lohri day.

In various places in the Punjab, between 10 and 15 days before Lohri, groups of young and adolescent boys and girls go through the neighborhood collecting firewood for the Lohri bonfire.  In some places, they also collect items such as grains and brown sugar that are sold and the proceeds from the sale are divided among the group.

In some parts of Punjab, there is a popular "trick-or-treating" activity by children to select a member of the group to smear ash on her face and tie a rope around her waist.  The idea is that the selected person acts as a deterrent to people refraining from giving items to Lohri.  Children will sing Lohri songs asking for Lohri items.  If not enough is given, the head of the household will be given an ultimatum to give more or the rope will be loosened.  If not enough is given, then the boy with the smeared face will try to enter the house and break the clay pots or the clay stove.

During the day, children go from door to door singing songs and are given sweets and salty gifts and sometimes money.  Returning them empty-handed is considered inauspicious.  Where families welcome newlyweds and newborns, requests for treats increase.

The collections put together by the children are known as Lohri and consist of til, gachchak, icing sugar, gur (jaggery), moongphali (peanuts), and phuliya or popcorn.  Lohri is then distributed at night during the festival.  Peanuts, popcorn, and other foods are also thrown on the fire.  For some, throwing food on the fire represents the burning of the previous year and the beginning of the next year on Makar Sankranti.

The bonfire is lit at sunset in the town's main square.  People throw sesame seeds, gur, sugarcane and rewaries into the fire, sit around, sing and dance until the fire goes out.  Some people perform a prayer and go around the fire.  This is to show respect to the natural element of fire, a common tradition at winter solstice celebrations.  It is traditional to offer guests til, gachchak, gur, moongphali (peanuts), and phuliya or popcorn.  Hindus also pour milk and water around the bonfire to thank the Sun God and seek continual protection from him.

Among some sections of the Sindhi community, the festival is traditionally celebrated as Lal Loi.  On Lal Loee day, children bring wooden sticks from their grandparents and aunts and light a fire by burning the sticks at night with people enjoying themselves, dancing and playing around the fire.  The festival is gaining popularity among other Sindhis where Lohri is not a traditional festival.

Lohri and the financial year

Historically, during the 19th century, income from winter crops was collected in Lohri or Maghi.

Lohri is celebrated to denote the last of the coldest days of winter.  The festival has been celebrated in Delhi, Punjab, Haryana, Himachal Pradesh and the Jammu region of Jammu and Kashmir since Mughal times.  The festival is observed as Lal Loi in the Sindhi community.

Similar festivals in other countries

The Hogmanay festival is celebrated on New Year's Day.  The Stonehaven Fire Festival in Scotland is a direct descendant of lighting bonfires on the winter solstice.  Every January 11 another event is observed when the flaming Clavie (a barrel full of staves) is carried around Burghead and minted on Doorie Hill.  When it burns down, people take the burning embers to bring good luck for the coming year.